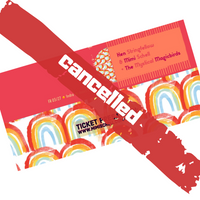 Due to the ongoing Corona Crisis this event sadly had to be canceled!

This was our original press text for our participation at Come Together Experience Beatles Festival in Hamburg. Before Corona Crisis forced the organizers to cancel: “American indie rock legend Ken Stringfellow (The Posies, R.E.M, Big Star) and Hamburg-based artist Mimi Schell, whom Music Global (Switzerland) called “a voice that you have to hear, a sound which can hardly be eluded”, have been collaborators for many years now; in fact, Stringfellow produced Mimi Schell's recently released debut album, HELIODOR. “When the festival asked Ken and I to participate,” explains Schell, “my imagination went wild about putting a band together only just for this special evening, made up of friends and avowed Beatles fans. We are delighted to have assembled such exquisite musicians for this one trip, such as the Hanoverian Hammond-Wizard Lutz Krajenski on various keys, Beatle-Maniac Marcus Gnadt on the Höffner-Bass and.., totally in love with Ringo, Alex Jezdinsky on his 50s Ludwig Drum kit, and a brass section! This unique ensemble will dedicate itself to the Magical Mystery Tour album, with its psychedelic moments, but also sing-along hits like “Penny Lane”, one would already like to look forward to Ken Stringfellow's and Mimi Schell's charismatic energy. Fun fact with Awe-Factor is that Ken will return to Grünspan for the first time since the legendary Rockpalast Show in 1998, where he performed as a long-time tour and studio member of R.E.M..” The festival had to be re-scheduled to August 15/16. But our band was ready to play, flights for Ken booked...so what to do?We decides to do it anyway! For everyone who has been looking forward, who already booked travel etc. It’s clear the Festival didn’t have any other option but cancelling, since the risks had been too high for a larger scale event like that. What we will do is small. No panic. We are happy that the legendary Indra Club will have us! Let’s make it a small but even the merrier celebration! <3